Your Hidden Wisdom and Inner Capacity 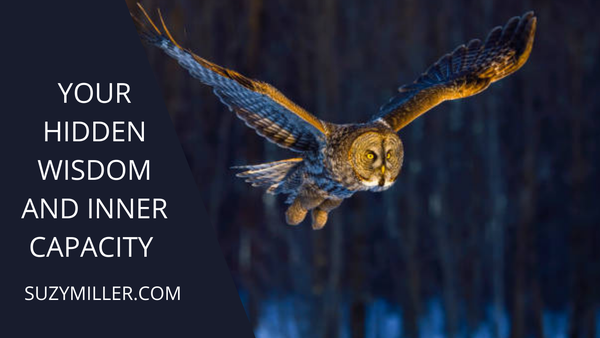 I noticed something recently that I had not been able to put my finger on before. Most of us are quite capable of being present to just about anything that arises. Regardless if it is a thought, a feeling or a physical issue, we can be with it. We are not the kind that run and hide from what is emerging, even when we don’t like how it feels. That’s a great skill to have and is one that will serve us all well as we move through this time of awakening.

What became evident to me lately happened in stages. At first I noticed that some of the methods or supports that I have used in the past were no longer as helpful as they had been. It was as if I was still gaining awareness, but the capacity to create change with that awareness was waining. I also noticed that my reason for being present to what was arising had reverted to a less mature desire to “just get through it”.

I suspect there is a part of each of us that doesn’t want to have to go through “one more thing” and just wants to “get” wherever we think we are going so we can be done with that thought, feeling or experience, but of course we are never done remembering who we are and we are always revealing the greater truth that lies within. It becomes obvious that with each “deep dive” into self awareness there lurks an old story and a hidden capacity.

We each have a story and that story both creates our patterned experiences and invites us to move beyond them. I hit a place over the last couple weeks where I noticed that I could not carry on with the story. I could see that to do so, even in the smallest degree, was limiting my capacity and my joy.

I could feel I wanted something else, but I did not yet know what that something else was. I knew that the new world was here, but felt like I was still carrying something that was not giving me the access that would cause my new world to be reflected in my daily experiences.

Since my old methods of shifting things seemed to have stalled out I decided to start spending time listening to silence. You might call that meditation, but honestly I am not sure if that is what this is or not. My practice is to just sit for an hour and listen, witness and watch what is there. During those sessions almost nothing of interest takes place, however outside of my “meditation” time, I am becoming aware of things that I have not noticed before.

I saw that no matter what story I told myself, be it perceived as good or bad, it was not what was happening now. Stories are moments outside of the now. I also noticed that if I was in a past experience, I could always find good and bad in the experience no matter what it was. It became evident that whatever that experience of the past, that still haunts us today, it only haunts us because we have not yet seen the capacity that we gained from those moments.

For instance, if as a child, we experience a breech of boundary or a betrayal we typically spend the rest of our lives, unconsciously and sometimes consciously, focused on creating safety. We move through our days not trusting, not being open to new relationships or connections and basically attempting to avoid our past all the while claiming that it is someone else’s fault that we are not able to fully trust. We all do this in subtle and not so subtle ways. What I realized ( saw with real eyes) was that the experience that was perceived as bad also helped to enhance an innate capacity.

For instance, the child who was betrayed becomes acutely sensitive to who they can trust and who they should not. For the one who had a boundary breeched, they become well versed in setting and maintaining clear boundaries. Both provided they are willing to put more attention to what was gained instead of what was lost in their early experiences.

But here is the kicker until we stop going to our past looking for the reason life is as we are now, we will never place our focus on the great capacity that we are and have always been.

Those who have the greatest capacity to know who to trust and are themselves the most trustworthy are often those who have been betrayed. Those who can set loving boundaries and clear intents are typically the same ones who earlier had a boundary breeched.

This is a hard one to hear, but we simply can not move into a new world while perpetuating a old story. To do so is to abdicate our capacity. Can we invite ourselves to see that there was a gift and a grace in every experience? Can we acknowledge that no one else can see our capacity until we ourselves can see it?  Can we sit in the stillness of our own being, and regardless of what surfaces recognize that we are NOT that. That is story. Can we recognize that what we are, is not and never was, what we were experiencing. We are PRESENCE. We are that which is aware, not what we are aware of.

We begin to shift into the new world, not through a doing, but through a state of being. We recognize that state of being by first realizing that where we first saw pain, there was also capacity. As we access capacity we will feel safe enough to use that capacity to be the PRESENCE that witnesses anything that arises.  The weak and the powerful within us will all be seen as one and we will feel whole.