DO YOU WANT TO HEAR A STORY? 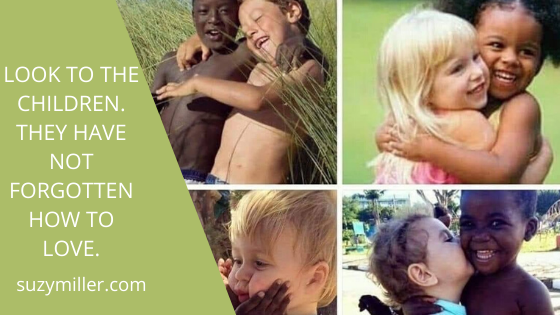 In the midst of the protest and riots, I was searching for a deeper understanding regarding what was arising and feeling heavy in the separation of it all. I live outside of LA so the energy of this experience is very tangible. In meditation this morning, I heard ” Do you want to hear a story?” Like a little child, hungry to hear more, I said yes. This is what I heard.
It seems to me that in the innocence of our children, we can most often find the solutions. I do not know if this story is true and I don’t think that was the point. I believe that it was the innocence of being curious and willing to see through another lens that brought this story about. I do know that this made me feel better and so I thought I would share!
Do you want to hear a story?
All of humanity originated from the dark-skinned ones. They, the color of the Earth, constantly a reminder of what it means to be human, in connection with the depth of the soil and the planet that you call home.
The more you moved away from the soil, the whiter you became. In the white man’s ignorance, he sought to repress the internal memory that it was not he, but the dark-skinned ones who knew how to create from this Earth. Their creations, not initially from force, but from a deep recognition that they were one with her.
No matter how suppressed the dark-skinned ones were, they still sang to the land. They sang to the harvest. They still praised the Lord and their connection here on Earth. Their songs of suffering, were both for themselves and for the white man’s separation from what makes him beautifully human.
Their souls are united as a constant reminder that those of the various colors of the soil are the ones who help give rise to a new harvest, a new human and a new humanity. Deep within they know the path back to our humanity and in their pain, they still call us back to the humanity within us all.

Twenty-Minute consultations provide the opportunity to see if Suzy’s services and support are a fit for you.