Assume That They Can 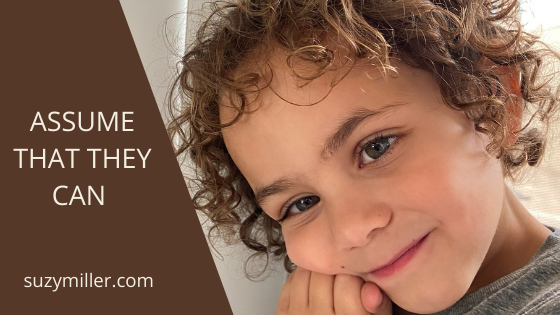 NOTE FROM SALLY:
So after I filmed the video I ran back inside in the rain, it was pouring down rain. K asked to go out and listen to music in my car (which means windows, doors, and sunroof open usually). I said “no dude it’s raining”. He then asked to do it at 7pm (an hour later) and I said ok dude you make that happen…. and he got the BIGGEST grin on his face!!! The rain is starting to subside now so we shall see, but I had to send this message while I had the time and energy!
After he turned on the power and realized he perhaps could stop the rain he asked me for yogurt. I told him to get it himself, he’s been refusing to for months. Then I laughed at MYSELF!  He’s turning on power and stopping rain, who am I to complain that he won’t get his yogurt haha! But that too will change.
Wow.  Cool stuff!
Thank you, thank you, thank you!
Love,
Sally
There are a wide variety of assumptions that we have about our children and there are also a wide variety of capacities that exist just beyond those assumptions. If we are going to assume anything, Let’s assume they can. Let’s stretch beyond what we believe is possible.
It’s likely that they and we will be surprised and delighted in the process.